for professionals in the food industry and industry

Since 1832, LÉTANG FILS has been offering a wide variety of moulds for the catering iproduction and the food industry. Thanks to its solid experience in metalworking, LÉTANG FILS produces hinged moulds for ice cream and sorbets, stamps original shapes into sheets, headbands and couplings for biscuits, pastries and Viennese pastries. You will also discover a multitude of half-shell shapes, intended for chocolate and confectioners as well as caterers. The importance of its know-how, its fleet of several thousand dies, its innovation capacities make LÉTANG FILS your privileged partner for the realization, the renewal of your plates and moulds, as well as the creation of new shapes. 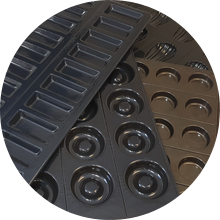 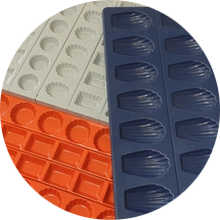 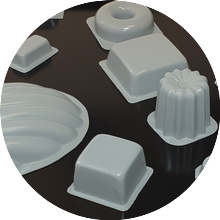 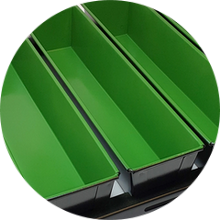 The Létang company, founded in 1832, has developed its mould making activity over the last two centuries in keeping with the family tradition. Its extraordinary know-how has been enriched year after year by the technical progress and discoveries of the 19th and 20th centuries. The heritage transmitted to date consists of more than 12,000 matrices whose variety, quality and level of detail make it a unique collection in the world that continues to expand through new creations.

Since 1832, the reputation of LÉTANG FILS has grown steadily. It has quickly crossed the borders of France and allows today the company to have customers all over the world who appreciate the quality of these traditional French products. Today, LÉTANG FILS is delivering its products to the four corners of the five continents (from North to South Africa, from the Atlantic to the Pacific of the two Americas, from Europe to the borders of Asia)