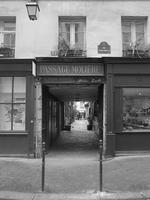 Creation of a mould-making workshop under the brand''Aux Armes de Bretagne'' at 82, rue Quincampoix in Paris, by Jean-Baptiste Létang. This particularly qualified worker began by delivering tinned iron moulds to chocolatiers.

Madame Eugénie Létang and her son Victor Louis Henri, then 10 years old, take over the company of Henri Victor after his death. 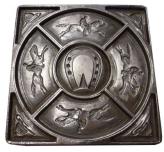 The historical report of 1867 gives  Létang the opportunity to advance the manufacture of tin moulds using stamping and a very complicated mechanical tool. The report continues: « At that time (1832) Monsieur Létang, an excellent worker, founded a special company for the export of chocolate moulds, which, thanks to the improvement brought by this worker and his son in the tooling and their manufacture, has continued and is still the first of its kind today»

The Third Republic: The round of Universal Exhibitions resumes and the time for medals returns.

Eugénie Létang signs the oldest preserved catalogue of the House of Létang.

Third Universal Exhibition in Paris where the Maison LÉTANG FILS stands out once again.

Victor Louis Henri, then 27, takes over from his mother Eugénie at the head of the company LÉTANG FILS. 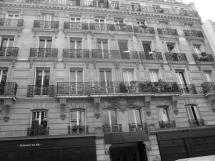 The fourth Paris Universal Exhibition ensures that the Maison LÉTANG FILS receives the most euphoric publicity from the official judges: « Parisian mould workers were the suppliers in the whole world »

LÉTANG FILS buys a building at number 108 of the old street of the temple.

During the fifth Paris Universal Exhibition, the Maison LÉTANG FILS will immortalize the exhibition with a chocolate mould faithful to the family tradition.

A catalogue is published by the Maison LÉTANG FILS Srs A and M ( A for André and M for Marcel), which reproduces 3200 different models and it is only a sample.

André and Marcel take over from their father Victor Louis Henri.

André and Marcel Létang are at the head of the Létang Fils company, which at that time had 250 employees. They open a warehouse in Brussels, Rotterdam and a third one in Turin.

At that time, the tin-plated  iron that had finally dethroned tin is in turn threatened in its hegemony by nickel plating.

André, Marcel and their elder brother Henry publish a wide range of catalogues whose red covers and Art Deco style that  will travel all around the world. They adopt an oval seal that will stamp all their productions. This seal is still used today  to sign the work of the house.

Jacques Létang, heir to André, sells the company LÉTANG FILS The LÉTANG FILS Label is taken over by two new managers André Boaziz and Pierre Nathan who continue to operate the stock of moulds then valued at 12000.

Tin-plated  iron is abandoned in favour of nickel-plated and stainless steel.

Jean-René NABAT CEO of Emballage Technologies, company specialising in the engineering and construction of packaging lines and Jean-François PERRAULT CEO of Ouest Pack, company specialising in the processing of flexible packaging films, with the assistance of Pascal LE DAYO Director of Operations of Tamain Packaging, crates and containers made of pleated parchment paper, take control of the company LÉTANG FILS SARL. 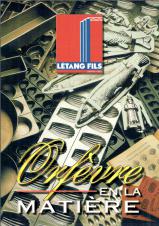 LÉTANG FILS joins the the Létang family's historic birthplace  in Bretagne. In April it moves to the nearby site of the company Tamain Emballages in Coray in South Finistère.

The company LÉTANG FILS settles in the factory built in the Coray industrial zone.

A specific workshop is reserved for the operation of the art machines that make the fineness and robustness of the moulds and LETANG FILS  molds and footprints.

Richard Le Corre, production manager within the company, specializing in the art of stamping and the design of moulds of all kinds for 19 years takes over the company's reins.